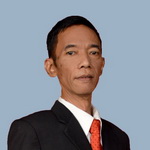 Waskito Ariwibowo graduated from University of Indonesia in 1990. For 9 years, he worked as a Public Defender at the Indonesian Legal Aid Foundation (LBH) as Head of the Defense and Environment Division. During the spring of 1994, he took the opportunity of a short course in University of Wollongong, Australia. Following that, in 1997 he was awarded a one-year scholarship from the British Chevening Award for a postgraduate program in International Human Rights Law at the University of Nottingham, UK. He joined the Kemala Foundation in 2001 and in 2002 he joined LMPP Law Firm. Waskito has worked in various litigation experiences such as civil, administration, labour, religious court, and criminal.